Stewardship of Earth and Sky

Being a good steward of both Earth and the sky is a core principle of NOIRLab. This commitment begins in our local host communities in Arizona, Chile, and Hawai‘i. Steps towards sustainability include shrinking the carbon footprint of our activities, preserving dark skies, and being attentive to the lands that host our facilities. This page highlights NOIRLab activities that are making our operations more environmentally sustainable.

The ASTRO2020 Pathways to Discovery Decadal Report recommends the following actions to address climate change: “ … increase the use of remote observing, hybrid conferences, and remote conferences, to decrease travel impact on carbon emissions and climate change.”

Via its Sustainability Program, NOIRLab is committed to implementing more environmentally sustainable operations by reducing staff travel and grid power consumption of the facilities.

NOIRLab’s current goal is to lower our carbon footprint by about 30%, from its estimated size of 8700 tons CO2 equivalent in 2019 to a target value of about 6200 tons CO2 equivalent by late 2027. This reduction will be comparable to the footprint of the annual electricity consumption of 500 typical US houses. These values do not yet include the Vera C. Rubin Observatory at Cerro Pachón, which is expected to start operations in late 2024.

This reduction will be achieved using a two-tiered approach: 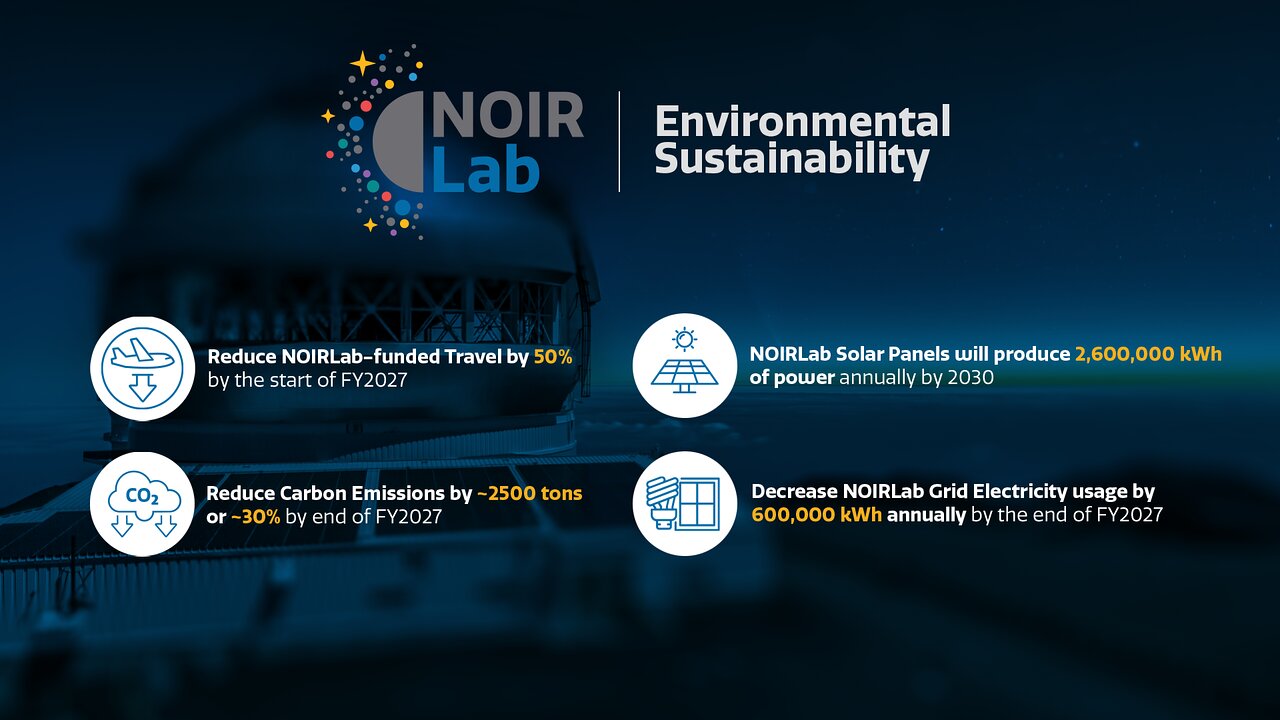 Summary of the environmental sustainability activities currently ongoing at NOIRLab. 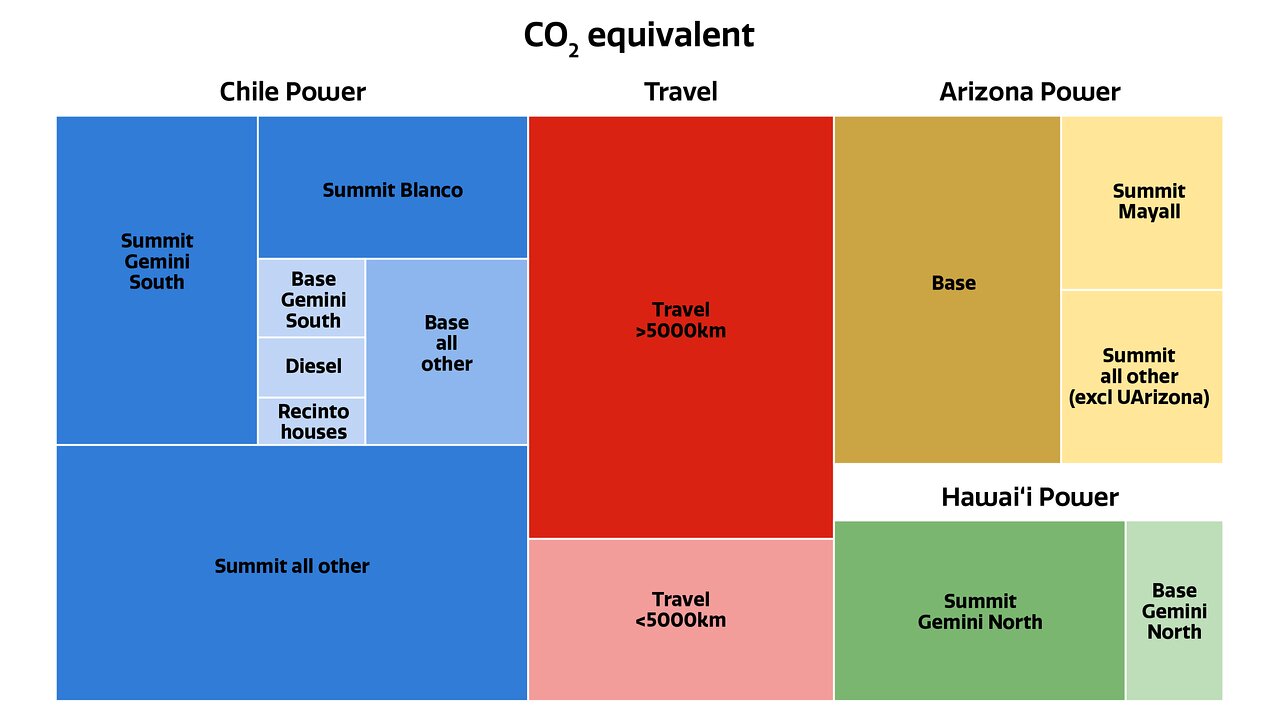 A representation of NOIRLab’s carbon footprint in 2019. The area of each rectangle is proportional to the footprint of the named activity or facility. This includes electricity, diesel use for backup power, and travel.

As a federally funded facility, NOIRLab has both an opportunity and an obligation to lead by example by changing how we operate in order to minimize our environmental impact, and sharing this change with the community and the public.

In recent years, many NOIRLab observatories, and those of our partners, have streamlined their nighttime operations and reduced their summit footprints through remote observing and, increasingly, automation. This minimizes operating costs and brings the observatories into better harmony with their natural surroundings. Solar power supported by local battery storage, and supplemented by green grid power as needed, can reduce NOIRLab’s CO2 footprint.

NOIRLab’s Headquarters is based in Tucson, Arizona. Planned sustainability improvements here include:

These improvements are funded to be implemented over the time period 2023–2027. 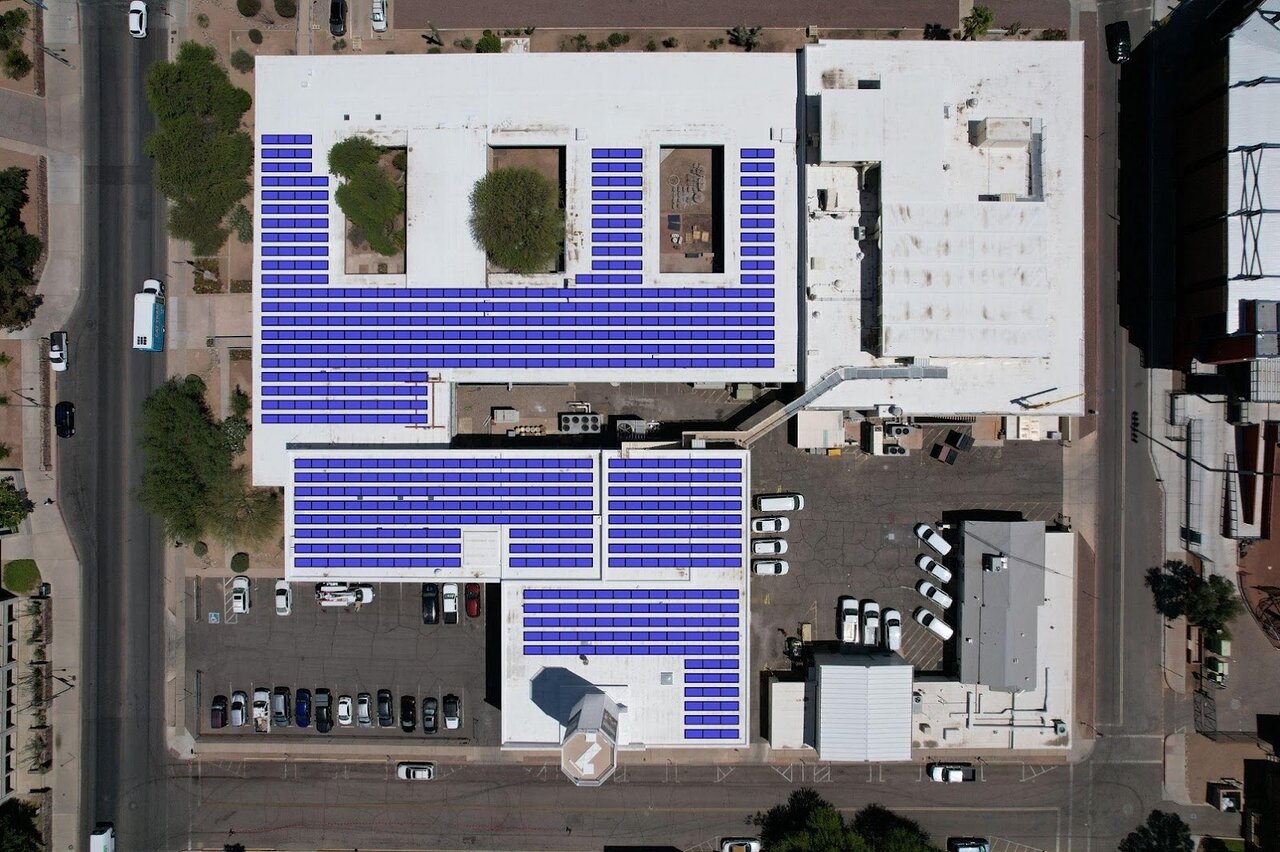 Layout of the planned photovoltaic system in Tucson, Arizona.

The following improvements are planned at both the sea level offices in La Serena and the mountain facilities of Cerro Tololo and Cerro Pachón:

These improvements are also funded to be implemented over the time period 2023–2027.

NOIRLab has also received supplemental funding from the National Science Foundation (NSF) to install a 810-kW addition to the current photovoltaic system near Gemini South at Cerro Pachón. The addition of battery storage to this system in the future would make Gemini South mountain operations carbon neutral in terms of electricity usage. The 810-kW photovoltaic system will be installed in the small valley below Gemini South.

Furthermore, the Chilean government aims to increase the renewable energy component of its electricity production from 11% in 2016 to 40% in 2030, further decreasing the fraction of fossil fuel produced electricity used at the facilities in Chile.

This drone footage shows an aerial view of Gemini South in the Andes mountains of Northern Chile. The photovoltaic panels were installed in 2016 and provide roughly 20% of the power needed to run the telescope.
Credit: International Gemini Observatory/NOIRLab/NSF/AURA

Many sustainable energy projects have already been completed at NOIRLab’s Hawai‘i facilities in Hilo and on Maunakea. A 100-kW photovoltaic system at Maunakea provides roughly 12% of the electricity needed to run the Gemini North telescope, and a 100-kW photovoltaic system at the Gemini North Base Facility provides about 20% of the electricity needed there. Installation of LED lighting and high-efficiency transformers, as well as chiller replacements and reconfiguration of the data management center, were carried out in the period 2015–2018.

NOIRLab will also add 100 kW to the existing photovoltaic system in Hilo. 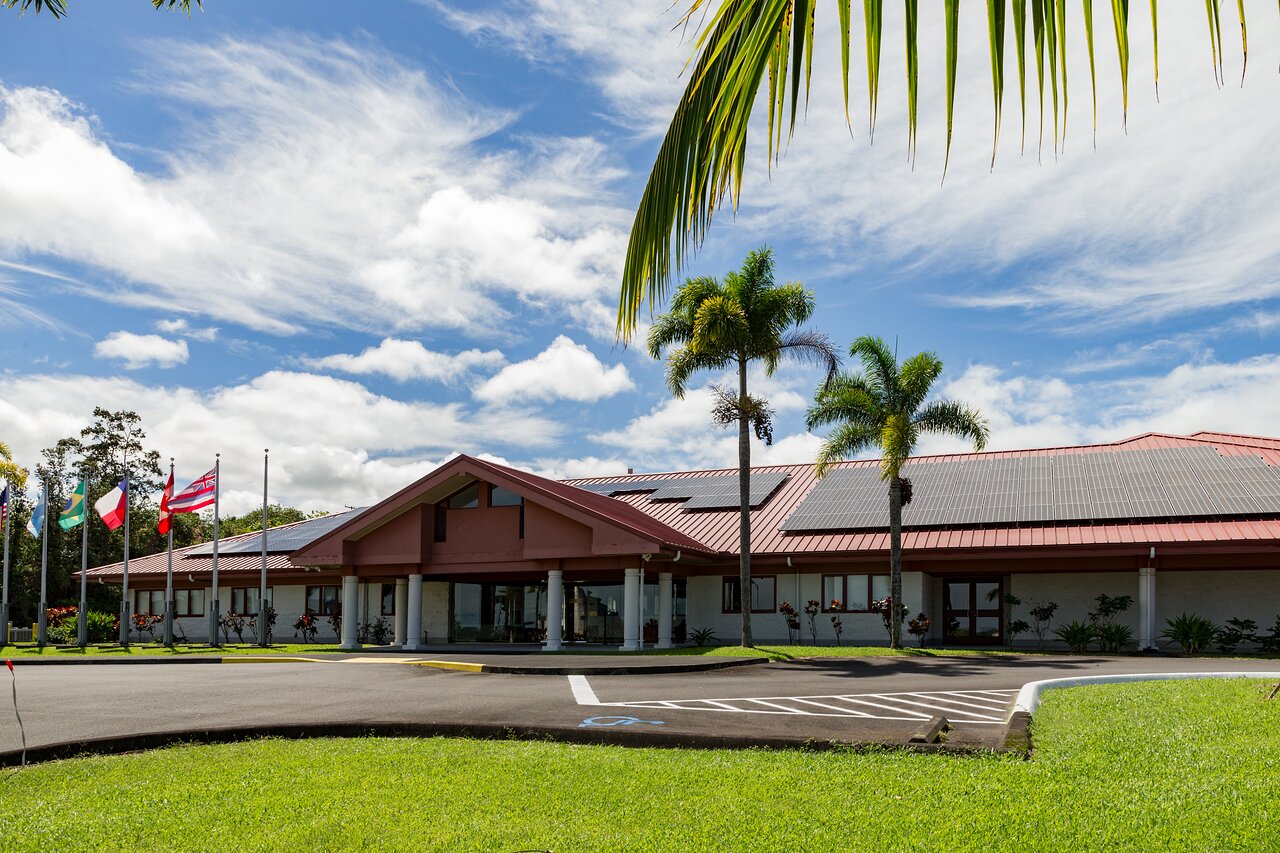 The photovoltaic system on the roof of Gemini North Base Facility. This system provides about 20% of the electricity needed here.
Credit: International Gemini Observatory/NSF’s NOIRLab/AURA/J. Pollard 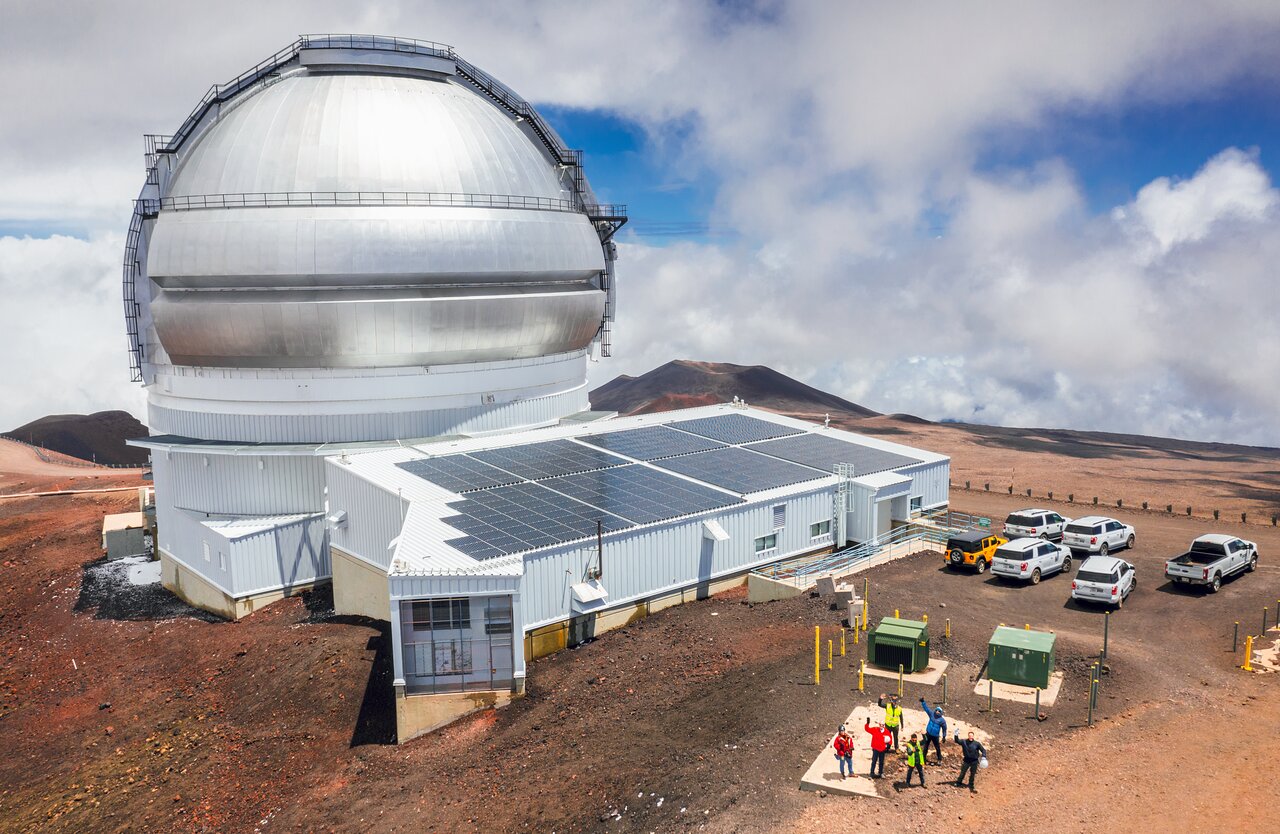 The Gemini North Telescope in Hawaiʻi. The photovoltaic system on the roof of the support building provides about 12% of the electricity needed to run the telescope. This system was installed in 2015.
Credit: International Gemini Observatory/NOIRLab/NSF/AURA/A. Hara

As illustrated in the figure below, the projects in the NOIRLab Sustainability Program will reduce NOIRLab’s carbon footprint by 30% by late 2027. 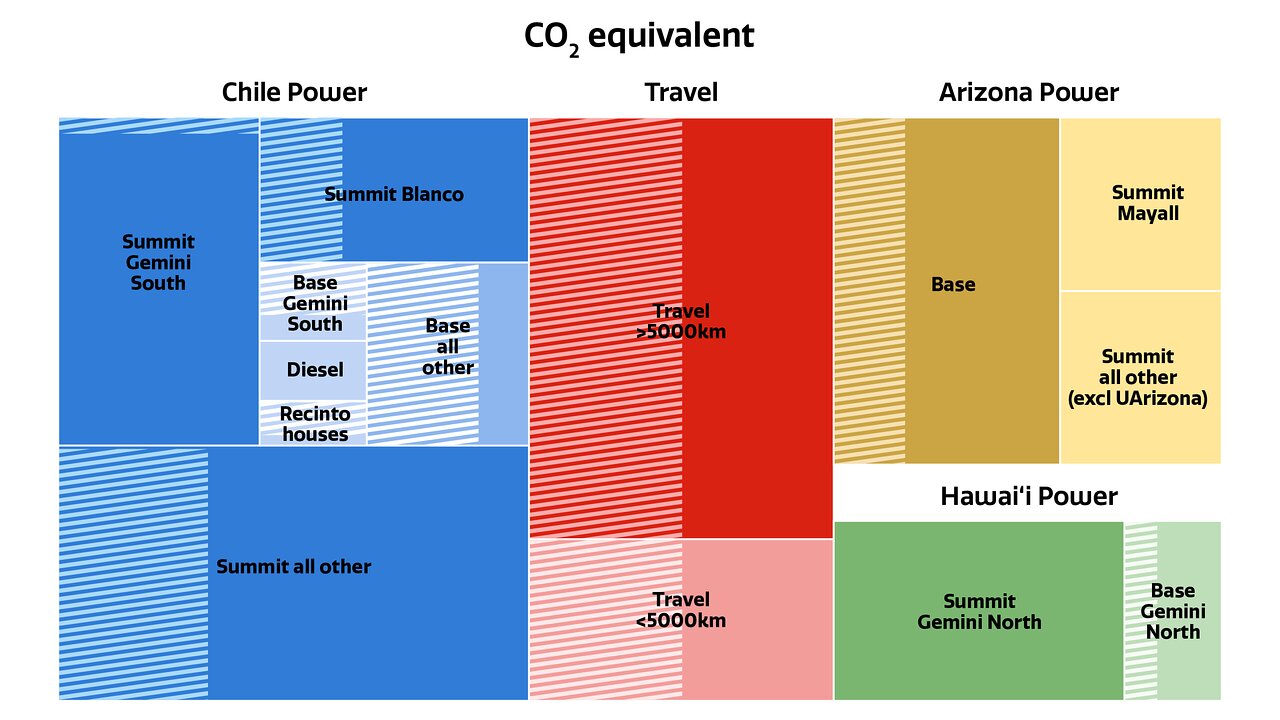 NOIRLab is actively seeking funding to enable additional energy efficiency projects including but not limited to the following:

Implementation of these projects will potentially lead to a total carbon footprint reduction of about 50%.