The SOAR Adaptive Module, SAM, is coming together in the optics lab. Here optical engineer Roberto Tighe (right), and software engineer Rolando Cantarutti test the realtime adaptive software with all of the final opto-mechanical components placed in the SAM module. Meanwhile, work proceeds in parallel on: completion of control electronics, cabling of the module, design of the laser guide star system (for the second phase), and design of the detector mount and dewar for the SAMI imager. The instrument is currently scheduled to be commissioned on the telescope in the Natural Guide Star (NGS) mode in mid-2009. The laser system is scheduled for commissioning a year later. The mechanical design of the SAM bench is nearly finished. The mock-up bench is used to trace the cabling and to check access for alignment. 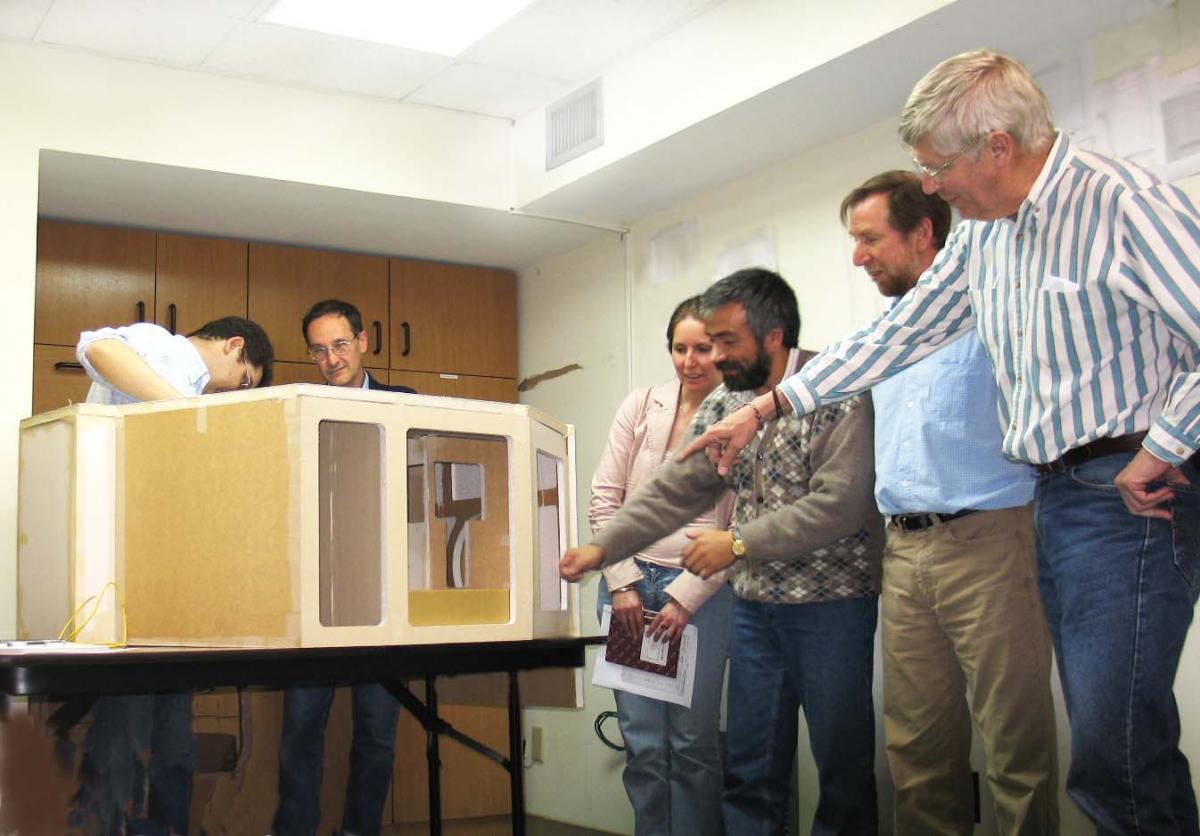 On March 2, 2005, Rolo Cantarutti successfully closed the AO loop on the SAM prototype in the laboratory. The images below show a point source in the closed-loop compensation (left) and with zero voltage on the DM (right). The second image is distorted by imperfect shape of the DM and static aberrations in the system. Only about 20% of the DM dynamic range is used for its self-compensation.

Image with DM off

Below: photos of the prototype setup. The DM is in the background, behind the big F=1016mm collimating lens and covered by a mask with 50mm hole. The Wavescope (on the left) was used to measure the response of the BIM-60 DM in detail.

Above: Snapshot of the computer screen with the SAM software running in closed loop. The main purpose of this prototyping is to characterize the real critical components to be used in SAM (DM, WFS, TurSim) and, mostly, to develop the software.

After fixing the LLT optics and other LLT improvements, the SAM laser was pointed back on sky. The picture below shows the radial profile of the un-gated LGS, FWHM 1.4arcsec. Improved LGS image quality allows seeing "rays" produced by turbulence. Images on the right show those "rays" with pedestal subtracted and their computer simulation. In a recent study, Salinas et al. 2016 (http://arxiv.org/pdf/1605.06517v1.pdf, accepted for publication in AJ) used the SOAR AO module (SAM) to obtain spatially resolved calibrated photometry of four globular clusters. With a median FWHM = 0.49", with values as little as 0.35" on a night of good seeing, the authors point out "that the higher image quality provided by SAM allows the calibration of the light curves of the great majority of the variables near the cores of these clusters as well as the detection of new variables even in clusters where image-subtraction searches were already conducted."