Punching Above Its Weight, a Brown Dwarf Launches a Parsec-Scale Jet

Astronomers using the SOAR telescope at the Cerro Tololo Inter-American Observatory report the discovery of a spectacular extended jet from a young brown dwarf. With masses too low to sustain hydrogen fusion in their interiors, brown dwarfs occupy the mass range between stars and giant planets. While young stars are commonly found to launch jets that extend over a light year or more, this is the first jet with a similar extent detected from a brown dwarf. The result lends new insight into how substellar objects form. 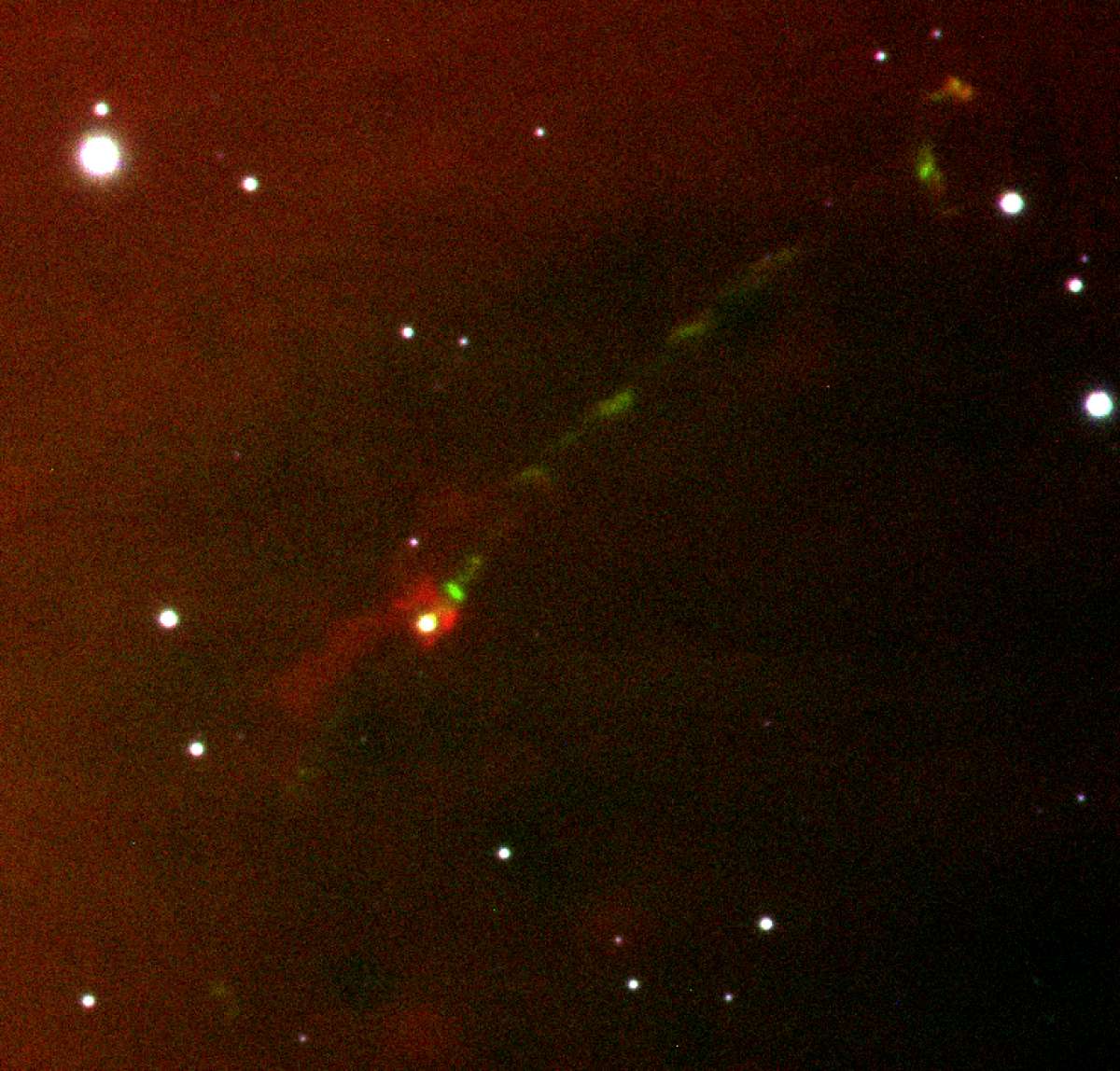 Intrinsically faint, brown dwarfs have been more elusive and difficult to study than stars. Although they are often portrayed as exotic creatures as a result, brown dwarfs are actually far more numerous in our Galaxy than stars like the Sun.

The discovery, accepted for publication in the Astrophysical Journal, supports the emerging picture that brown dwarfs form similarly to stars.

The SOAR Adaptive Optics composite image shows the jet, HH 1165, launched by the brown dwarf Mayrit 1701117 in the outer periphery of the 3 million year old sigma Ori cluster. Traced by emission from singly ionized sulfur, which appears green in the image, the jet extends 0.7 light years (equivalent to 0.2 parsecs) northwest of the brown dwarf. The emission knots along the jet reveal that the mass loss is time variable, probably a result of episodic accretion onto the brown dwarf. The red nebulosity southeast of the brown dwarf is a reflection nebula that traces the outflow cavity in the direction of the counterjet.

While outflows have been detected previously from young brown dwarfs, the earlier detections were of “microjets” 10 times smaller in extent. “Our result shows that brown dwarfs can launch parsec-scale jets similar to those from young stars,” explains Basmah Riaz, who led the study.

The image, taken with the SOAR telescope using the SOAR Adaptive Optics Module, was obtained in several hours of integration time. As described by co-author Cesar Briceno: “We could see the surprisingly extended jet emission after the first 30 minutes of integration. It was a real ‘Wow’ moment!”

“The HH 1165 jet shows all the familiar hallmarks of outflows from stars: emission knots, a cavity with reflection nebulosity, and bow shocks at the ends of the flow. It checks all the boxes quite convincingly,” commented co-author Emma Whelan.

While it may seem counterintuitive that mass loss (in a jet) is an integral part of how an object grows or gains mass, this situation may arise because of excess angular momentum. When spinning skaters pull in their arms, they spin faster as a result of conservation of angular momentum. Similarly, when large, slowly rotating molecular cloud cores collapse, they may spin up too fast to squeeze down to the much smaller sizes of stars.

To test this hypothesis, the team is on the hunt for more extended jets from brown dwarfs, to understand how commonly they occur.

Cerro Tololo Inter-American Observatory is managed by the National Optical Astronomy Observatory, which is operated by the Association of Universities for Research in Astronomy Inc. (AURA) under a cooperative agreement with the National Science Foundation.