NOAO is operated by the Association of Universities for Research in Astronomy (AURA), Inc. under cooperative agreement with the National Science Foundation

At the approach of the new millenium, we find ourselves poised to address fundamental questions about the origin and evolution of the Universe and its contents. At NOAO, we anticipate the need in the coming years for a new national facility optimized for deep, wide-field spectroscopy that will enable the systematic study of large numbers of sources in order to characterize their properties, formation and evolutionary history, and cosmological significance.

The document below outlines a scientific case for such a facility and illustrates the technical feasibility of building a spectroscopic system capable of accomplishing these scientific goals. The technical specfications assumed in the document (e.g., 8.4-m aperture, 1.5 degree field-of-view) are solely for the purpose of the feasibility demonstration and are likely to evolve as new ideas in the design and construction of larger aperture, wide-field spectrographs are explored. 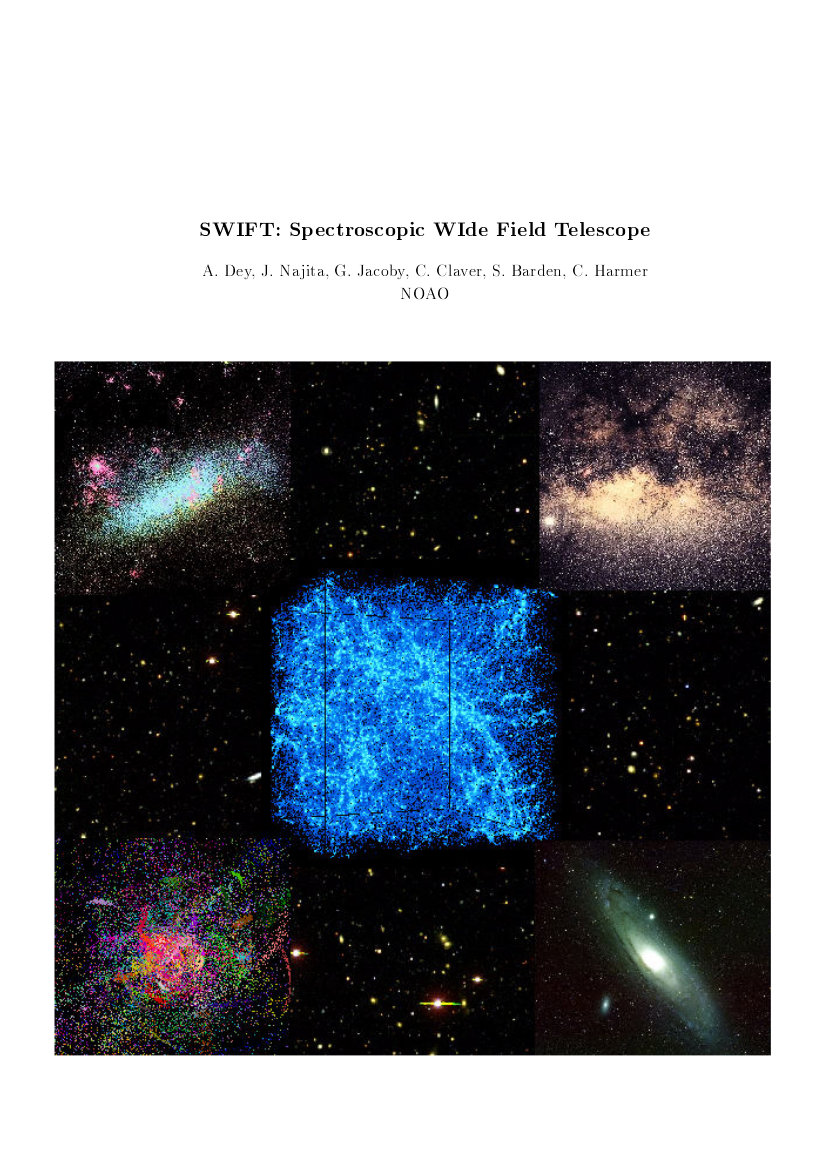 Missions on the ground and in space have the sensitivity to detect 1000s to hundreds of thousands of sources per square degree. SWIFT will investigate the astrophysical nature of these sources.

Wide-field imaging cameras on ground-based telescopes have the capability to map a significant fraction of the sky to a depth of R~26 (5 sigma) within the next 5 years. These surveys drive the need for the highly multiplexed spectroscopic capability of SWIFT.

SWIFT excels at studies of many objects, either at high densities on the sky (1000's per sq. deg.) or only moderate densities (100's per sq. deg.). The figure below illustrates how SWIFT proposed here compares with other existing and proposed spectrographs. The size of the label indicates the faintness of observable limiting magnitude. 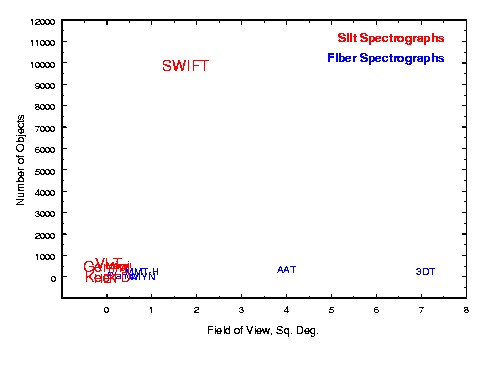 The "Spaghetti project" (Freeman, Harding, Mateo, Morrison, Norris and Olszewski) is searching for kinematic substructure in the Milky Way's halo to answer the question: how much of the Galaxy's halo was accreted from dwarf galaxies like the Sgr dwarf? This image, made from models by Paul Harding, shows what a halo might look like which was formed by accretions at various times during the last 10 Gyr of 50 dwarf galaxies.

SWIFT will be extremely effective at identifying the kinematic signatures of dwarf galaxy remnants like those shown here.